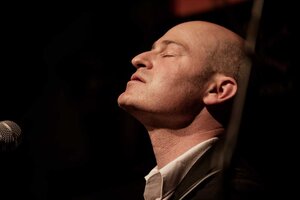 An evening of Klezmer Punk with Geoff Berner.

In a few short weeks, Geoff Berner returns with new left-wing Jewish music for our perilous times. Grand Hotel Cosmopolis is the first new klezmer-punk album from Berner since 2015’s We Are Going To Bremen To Be Musicians.

Today, the Vancouver singer/songwriter/accordionist/novelist/political activist shares another new track from the upcoming LP, „Not the Jew I Had In Mind (With Permission from Thomas King)”. “This song is for everyone who has ever been made to feel ‘not Jewish enough, or not the ‘right’ kind of Jew, or has had their Jewish credentials questioned, whether by Jews or non-Jews,” says Berner.

“The great writer Thomas King, who is self-identifies as being of Cherokee, German and Greek descent, gave a series of lectures that became a book called The Truth About Stories. One of the lectures is called ‘You’re Not the Indian I Had In Mind’. It’s about the way white people often reject ways of being Indigenous that don’t meet their stereotypical expectations.

I always loved that line, ‘Not the Indian I had in mind’. It really nailed something perfectly. I have experienced a similar phenomenon as a Jew. In my travels, people wanted to know if I was really Jewish, because they had notions in their minds of what was really authentically Jewish, and what was not. And anyone who was not, was maybe trying to trick them or something. They would decide if I was a real Jew.”